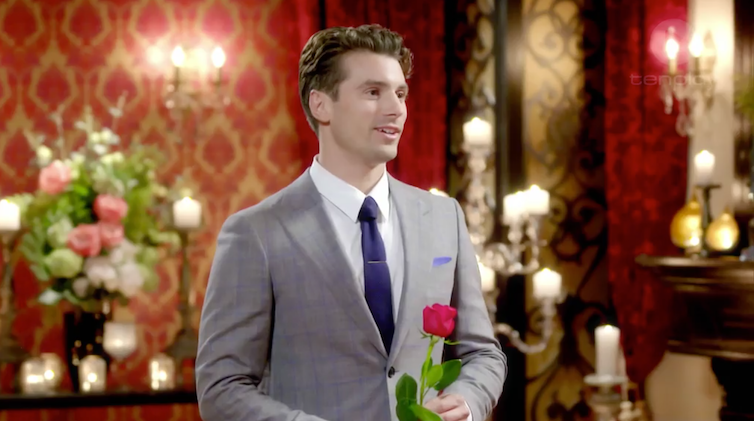 Matty J, the current Bachelor in the Australian version of the franchise, prepares to reward one of his suitors with a rose.
Network 10/Warner Bros. International Television Production
Beatrice Alba, Monash University

The Bachelor attracts widespread criticism for being old-fashioned, anti-feminist, and humiliating to women.

The show involves a group of women competing for the attention of “the bachelor” — the single male star. He offers a rose to those who win his affections, enabling them to stay in the competition.

Is this courtship ritual old-fashioned and outdated? Or does it accurately reflect modern, mainstream norms around heterosexual romance?

Will you accept this rose?

On the dating scene, men are generally expected to approach women, and to invite women on a date. When a man “takes” a woman out to dinner he will typically offer to pay for the meal.

In relationships, when the man decides the time is right for marriage, he presents the woman with a ring and asks her to marry him. If he is especially true to tradition, the bride-to-be’s father is asked for permission before she is. Conventional weddings are as fashionable as ever, and there is no shortage of ostentatious marriage proposals by men that are shared online.

This pattern of male leadership and female passivity in heterosexual romance is woven into the formula on The Bachelor. He makes the first moves, while the women wait passively for attention, dates, and a rose.

However, unlike any typical real-life situation, The Bachelor pits multiple women against one another to win the approval of just one man. But even when you subtract this competitive group element, the man is still in control if it is up to him to decide when to make a move – whether that means giving a rose, asking for a date, or asking for a hand in marriage.

The core problem of male decision-making and power remains even when there aren’t multiple women competing for him. Ordinary heterosexual dating is really just a rose ceremony for one.

Despite norms dictating female passivity in heterosexual romance, we do sometimes see behaviour that violates these expectations on The Bachelor. Occasionally, a female contestant assertively approaches the bachelor and pulls him away for one-on-one time. Sometimes the women behave competitively with one another through direct and indirect verbal attacks.

Such competitive behaviour is sometimes construed as women being “their own worst enemies”. An alarmingly common inference from such assessments is that women are somehow to blame for the discrimination and disadvantages they experience because of patriarchy.

If anything, this competitiveness is counter-stereotypical behaviour for women, given that men are typically seen as being in competition for women, who are considered the “choosier” sex. And yet, it is the violation of such feminine norms that is often viewed with the most derision.

Men, on the other hand, are rarely accused of being “their own worst enemies” when they compete for women. Nor are their conflicts so frequently and readily condemned as a flaw of their gender.

What about The Bachelorette?

The gender-reversed scenario on The Bachelorette demonstrates that the rules of the game can go either way, as far as gender is concerned. But does this role-reversal disempower men in the same way that The Bachelor supposedly disempowers women?

First, the unconventional situation in The Bachelorette is unlikely to elicit conventional behaviour from the male contestants, since the situation is so unlike reality. Forcing males into a more passive role is always recognised as simply a brief suspension of conventional norms.

In fact, The Bachelorette is recognised as a subversion of traditional gender roles. This temporary role-reversal has an inherently different meaning, given that it occurs in a broader social context that is far more consistent to the situation in The Bachelor.

In this sense, we never truly reverse the roles, because it occurs within a context where conventional gender roles remain.

Once the show is over, the contestants return to ordinary norms, where men take the lead. Knowing this, any passivity or powerlessness that men might experience as contestants on The Bachelorette isn’t going to have the same impact, nor continue once they leave the house.

If anything, this reversal perhaps highlights the differences in the qualities that men and women tend to prefer in a partner. Research suggests that, among heterosexuals, women are more likely to prefer male partners with status and resources. Men, however, place much higher value on physical attractiveness in their female partners.

If women feel that The Bachelor trivialises them and overemphasises their appearance, it’s probably because that’s what the bachelor is looking for. The Bachelor and The Bachelorette might just reflect differences in men’s and women’s mate preferences, and why these reverse scenarios aren’t really the same.

What reality TV teaches us

While the rules of The Bachelor can easily be reversed to be The Bachelorette, we don’t see the same consequences for men and women in this role-reversal.

Perhaps it is for the same reason that real-life dating and marriage norms seem so resistant to change. It’s easy to be critical of traditional gender norms when they play out in an artificial setting, but in real life, traditions are held sacred.

If we are serious about gender equality then we need to be more critical of the norms and institutions that encourage female passivity in the first place. The Bachelor simply highlights the problematic ways that women might be disadvantaged by conventional gender norms around romance and relationships.

Perhaps it’s not the rules of this reality TV show that’s the problem, but rather the gender rules of reality that play out within it.