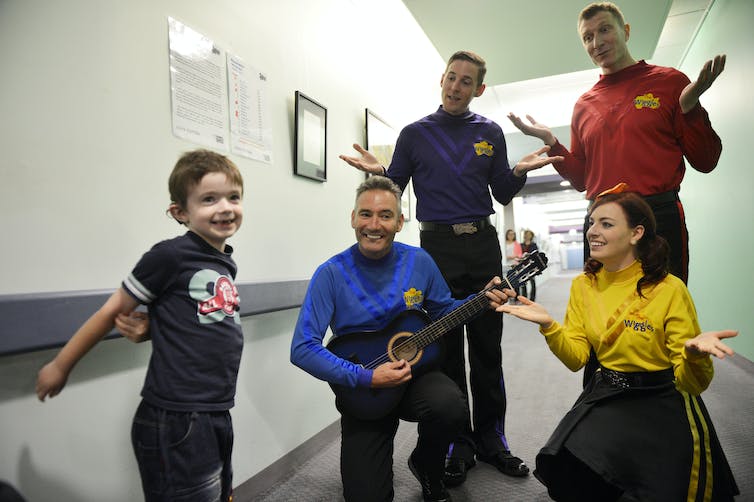 The mass media invented the teenager during the 1950s and 60s – and thus emerged a whole new audience for popular culture. What we’re seeing now is the recognition of children as an ever more important audience. Musicians and performers, including many on the program at the Sydney Festival, are tailoring their shows to meet the needs of their young fans.

Of course adolescence was nothing new back in the 1950s – but teenagers became an identifiable group who were targeted by people selling music, advertising and live performance in a way that they never had been during this time.

The follow-on effect has been quite remarkable, with 50s and 60s teenagers – AKA babyboomers – continuing their teenage patterns of music and media consumption.

As Andy Bennett and his colleagues have noted of the emerging era of Aging and Popular Music Studies, “in the early 21st century, the concept of ‘youth culture’ appears increasingly ambiguous and open to interpretation”. Audiences don’t grow out of mass media consumption, live music, and arts performance – rather, they take those habits with them as they grow up and on.

Step aside, teens, the kids are in town

If the teenager was invented in the 50s and 60s, the pre-teenager, the “tween” (in between child and teenager) and even the toddler, have been created by changes in the late 1990s and into the 2000s.

The rise of Australian children’s entertainers The Wiggles as all-round performers, composers, merchandisers and popular music innovators has proven that an audience once considered too young for “youth music” is, in fact, a group to be considered.

Not only have The Wiggles had the type of financial success most musicians can only dream of, theirs is a unique position in terms of influencing the next generation of music makers.

This was demonstrated by Re-Wiggled, a covers album released for The Wiggles’ 20th anniversary, in which “grown-up” musicians gave the pre-school fodder serious treatment. Particularly impressive are offerings by bands with members in their twenties. Their first experiences of The Wiggles come full circle with the new recordings.

Re-Wiggled: the Wiggles for the ages.

Listening to recorded music at home with your family is such an important thing for kids, and it can unquestionably set off a lifelong love of music. But seeing music live with a group of strangers is something else again.

Live music remains an important part of a working musician’s life and a music fan’s experience, with a 2011 study finding that live music in Australia is an industry worth over a billion dollars. Once that light has been fired up, it seems, it’s hard to extinguish.

It makes sense then that live music and performance generally for young audiences being increasingly incorporated into community festivals and live performance events.

Dedicated kids performances and experiences, such as Ali McGregor’s Jazzamattazz! At The Spiegeltent for the current Sydney Festival, a show she previously toured at other large cultural events such as the Edinburgh Fringe. It’s not unlike other successful shows, such as Holly Throsby’s program, in previous years.

Holly Throsby’s Fish and Mice, a song for kids.

These aim to acknowledge the special needs of young fans with early starting times and encouraged interaction. At these events kids learn how to be audiences in person rather than consumers at home.

We’re also seeing children’s events at key venues, such as the Kids at the House programs at the Sydney Opera House. It would be great to see more opportunities set regionally, and perhaps even staged for free or at discounted rates.

Tailoring live music to young audiences helps provide a more rounded musical experience generally, but can also build up lifelong music and arts-going habits. By tying these shows to a broader experience – of going to the annual festival, say, or to a particular venue – the hope is that audiences may continue to visit those places/ events in years to come.

An intimate and a social experience

In a recent book, Why Music Matters, music academic and fan David Hesmondhalgh tackles the puzzle of music’s appeal.

Exploring music across a range of different types of artistic expressions and audience experiences, he argues that “the fact that music matters so much to so many people may derive from two contrasting yet complementary dimensions of modern societies” – that is, “the intimate and the social, the private and the public”.

Similarly, the British Live Music Exchange, headed up by iconic industry and academic commentators Martin Cloonan and Simon Frith, also makes the case for the importance of both private and public music engagement.

Locally, initiatives such as Save Live Music Australia actively put their weight behind the maintenance of a sustainable live music culture in Australia. The grassroots organisation is backed as much by those onstage and in the audience – a love for the live experience is something shared across the barriers as well as during all stages of life.

Being able to access mediated music whenever we want – either via broadcasting, digital delivery or personal recorded music collections – is something that many young listeners get attached to at a very young age. But experiencing music live, as often and as young as we can, provides something special again.

It gives a type of context for where sounds are coming from, and the first steps into learning how we socially experience something that matters so much to so many.